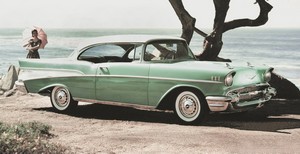 If someone was asked to sum up the 1950s in a single automotive icon, chances are that icon will be the 1957 Bel Air. It's simply one of those rare vehicles that encapsulate almost every recognizable aspect of that vibrant and exciting decade. It's also one of the few instances where a relatively ordinary mass-market car manages to set itself apart as a genuine icon of the age. It had fins, flash and most importantly, horsepower.

The 1957 Bel Air was the last of a three-year run of the second-generation full-size Chevy, significantly refreshed by chief engineer Ed Cole to maintain buyer interest. Although the Bel Air was available in the usual hardtop and pillared sedan forms, the Sport Coupe and convertible body styles continue to prove most popular among die-hard collectors. The iconic rear fins, rear side panel brightwork, wider grille and reworked headlight pods make the ’57 a standout among other vehicles of its time and an absolute favorite among collectors today.

However, the most well-known virtue of the 1957 Bel Air, at the time, was its performance. 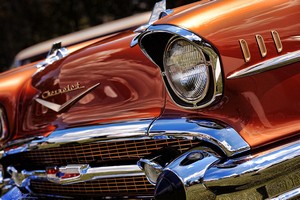 Chevy’s 265 cubic-inch V8, already considered a benchmark design during that era, had its displacement bumped up to 283 cubic inches for Bel Air duty. Instead of the four-barrel Rochester carburetor of the 265, the 283 came available with optional mechanical fuel injection, giving the already hot Bel Air even hotter performance. Of course, there was also a 140-horsepower 235.5 cubic-inch inline six-cylinder for more frugal buyers.

Depending on their taste for muscle and their checkbooks, they could choose among several horsepower outputs, ranging from a relatively docile 185 horsepower to a then-fearsome 283 horsepower. Ironically, the top option gave the Chevy 283 its top boast of having “one horsepower per cubic inch.” All of this power came in handy on the NASCAR circuit, which it came to dominate throughout the late 1950s. Buyers could combine their 283 V8 with the standard three-speed manual transmission, Chevy’s reliable two-speed Powerglide automatic transmission or the constant torque three-speed Turboglide automatic transmission. 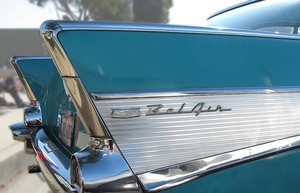 It wasn't much of a sales hit back in 1957, but the Bel Air came into its own first as the go-to car for the hot rodder of the 1960s and 1970s, then as a treasured collector icon. Today, it represents a glimpse into the treasured optimism and wonder that dominated America back then and helped define the cars it made during that time.
Share |
« Blog Home