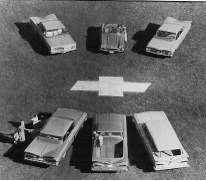 In this special 40th Anniversary issue we’re featuring some of our all-time favorite 1959 photos. We hope you will enjoy looking back 40 years, to 1959! 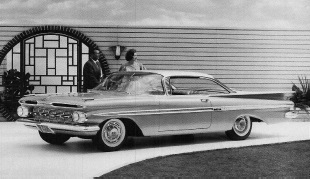 The 1959 Chevrolet family included an expanded line of Impalas. New to the family was the El Camino, a Sedan-styled pickup truck. The five models of Station Wagons showed the industry-wide growth of the Wagon market.

The Impala Sport coupe, Model 1837 had a production run of approximately 157,100 units.

Popularity of the new Impala in 1958 was carried on in 1959. The flagship of the 1959 line was the Impala Convertible. 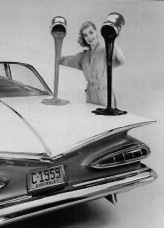 One of my favorite GM photos for ’59 - so you want a two-tone ’59. Two-tone ‘59s had the roof and upper rear deck painted one color with the balance of the car a second. On all except Biscayne and Brookwood models, a bright sash molding was added, accenting the color break. When Impala and Nomad models were two-toned, the insert area at the rear of the body side molding was painted the roof color. 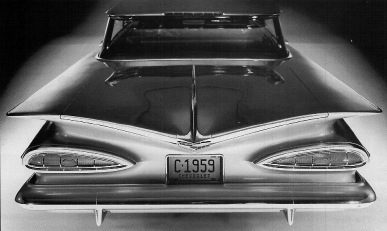 The most striking feature of the '59 had to be the fins and taillights, both added to the wider look! The Impala and Nomad taillights featured thin vertical molding dividers on each lens. The '59 fuel filler is hidden behind the license plate. 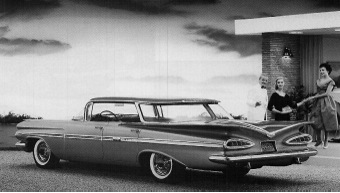 "Chevrolet" in script, a large "V," and crossed flags identified models equipped with 348 cubic inch engines. The position of the headlights gave the '59 that wide look. Fender 'rockets" appeared on all models except the Biscayne and Brookwood Wagons. A long crown molding extended rearward from the "rocket" on the Impala and Nomad models. Nearly all the trim on the front of a '59 is anodized aluminum.

Chevrolet's most expensive car in 1959 was this Nomad six-passenger Wagon! 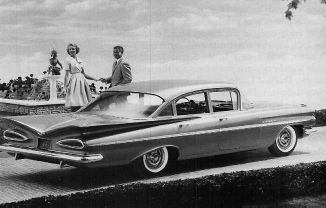 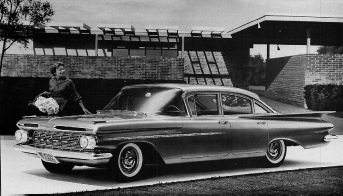 On both the Bel Air and Biscayne four-door Sedans the rear backglass projects high into the roof line, and is separated from the body and rear quarter window by slender pillars. These two '59s feature the small stainless steel hub caps with crossed flags. 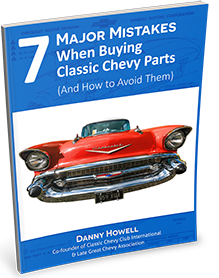