Imagine you’re on the African Savanna. A twig snaps under your foot and out of nowhere an antelope darts past you at over 50 mph!

Now imagine you’re crossing Route 66. You hear a faint humming which quickly turns into a roaring thunder. You feel a blast of air as a Chevy races past you at over 100 mph.

What do these examples have in common? Well, in both instances, you encountered an Impala. Yes, the unequaled Chevy Impala is named after the swift Impala antelope of the African Savannas.

“Longer, lower, and wider” the ’59 leaped into the world of innovative cars. It was considered a complete renovation from the 1958 Impala. There were certain characteristics that remained the same, but the overall appearance had undergone a complete make-over.

The new and improved ‘59 Impala boasted many new exterior features. The headlights were dropped 7 inches to the lowest allowed. In fact, they were so low that at night you could detect a 1959 Impala merely by its headlights!

The taillights came in two groups of three as they had on the ’58 but Chevy added some style. The taillights were now the shape of an elongated oval. These sleeker, pointed taillights became known as “cat’s eye” tail lamps.

The rear fender of the Impala dips into a “dummy scoop” in the center and flairs out to the sides forming the “eyebrows” of the cat’s eye tail lamps. These brows became known as “bat wing” rear fenders. They were the most distinguishable trademark of the 1959 Impala giving it a whole new vibe.

The exterior wasn’t the only change, though. The interior of the Impala received a comfort boost with its all new Flexomatic six-way power seat. You could now move your seat forward or backwards and up or down if you wanted to recline. In addition, the headrest could be adjusted upwards or downwards, creating maximum comfort.

The “speedminder” was also a new addition. It allowed the driver to set the speedometer at a certain speed. If this speed was surpassed, a buzzer would go off to alert the driver. 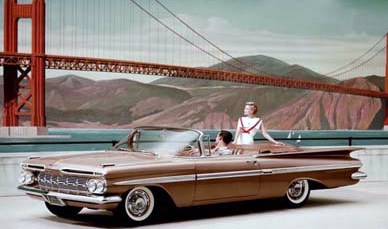 Whether leaping through the Savanna or racing down the highway, the Impala will surely catch your eye.

Great article! My mom bought a '59 Impala = brand new. It was turquoise...dark on the bottom, lighter on top. She loved it!
« Blog Home